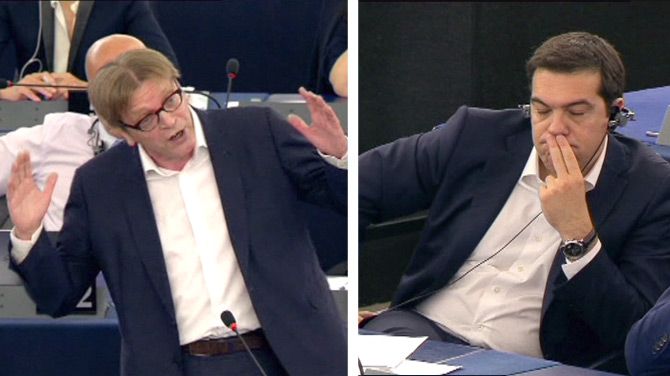 Guy Verhofstadt is the first start of European politics. He owes it to Tsipras. In private, of course. Collage from Flanders News.BE
The 6-year drama of the Greek bailouts may soon be over. The Grexit might start as soon as the next Monday. On the other hand, it's still possible the Greeks and the EU may find an unlikely compromise, and the drama series will enter into its 7thseason. Both experts and bookmakers say that the chances are 50/50.
But however the negotiations will end, the recent crisis with the referendum and the final Greek-German standoff has already changed the EU in several major ways:
1. European politics is the new cool.
This week, Europeans became interested in European politics, perhaps for the very first time. Usually, everything coming from Brussels is considered bureaucratic and boring. But not this time. Guy Verhofstadt's speech in European parliament – the very same European parliament nobody cared about for the last 20 years – has had more more than 7,5 million views. The unprecedented attention of the Europeans to the matters that concern not only their owncountries demonstrates that the European Union is starting to become what it aspires to be – a political unity. As paradoxical as it may sound, the mass disdain provoked by Tsipras may be interpreted as a sign of European solidarity and European values: solidarity in the notion that prosperity should be achieved by diligent work, not by unholy union of blackmail and panhandling.
2. No more enlargement.
Looking at the current Greek mess, it's very hard to envisage any EU enlargement in any near future. Turkey has just lost whatever slim chances it had to join the EU. Ukraine should better forget about its EU aspirations for the next 8-10 years. But even the candidates such as Albania, Macedonia, Montenegro and Serbia will be lucky if they manage to open concrete negotiations in the next several years, and when they do, the negotiations will be long, meticulous and painful.
3. Two-speed Europe is here.
Theover-closer union is unofficially over. After the Greeks' fiasco, nobodywill be improvidently pulled or even admitted into the eurozone. On the other hand, the existing eurozone countries will be forced to submit themselves to ever tougher control and unification of their fiscal policies in order to prevent future flops.
4. Radicalized left.
Thesurge of the left to power is over as well. Sorry, Podemos, but no more Sirizas in Southern Europe. Tsipras has demonstrated that radical left in power will either destroy the country or betray voters. Or, most likely, do both. It means that any leftist who really want see things done will vote for someone close to center. At the same time, younger and angrier left voters will feel that Tsipras has been betrayed. It may cause a big protest vote for radical left parties across the entire continent. Syriza-like parties will be present in many European parliament, but they will be marginalized. Hence, we may see more street protests, ranging from relatively peaceful Occupy-style actions to windows-breaking and fire-throwing violence.
5. Stronger EU.
It's often said, that the current crisis is making the European Union weaker. The opposite is true. Each of the possible two resolutions – Greece leaving the eurozone or Greece agreeing to European terms and conditions – will prove that the Union can manage a major crisis and either get read of its unruly members or make them behave.
All that said, the changes we're witnessing now are rather modest compared to the ones we may see in 2016 or 2017, when EU will be facing the choice between possible Brexit and the Lisbon Treaty reform.
Labels: EU Greece Lisbon Treaty UK